This article especially for you who have CDJ 1000 and want to be a DJ and have a better budget to own it at your home. For those who has take a DJ course just ignore this. I want to share about Cue and Play button on CDJ 1000. It would help if you owned the CDJ but have no clue how to use it.
Hopefully it will give you acknowledgment and as a introduction to a basic function of CDJ.

And if you able to operate Virtual DJ but never feel the real DJ hardware, it may help you to give a little enlightenment. So lets check it out....

It simply to play or pause your song, in practice this button also use to make a Cue Point (A Point Where the Song Start or Begin). How to use it? Let me show you.

Sometimes we find a song that has no kick at the first beat, so simply play the song and wait until the first kick appear and quickly pause the song, If you think the kick not inline or not perfect 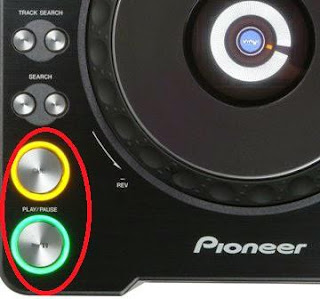 This button on CDJ 1000 or others CDJ have a Stop and Cue function (make a starting point on the song). So practically if you want to stop the songs that play on CDJ just press Cue Button and it will bring you to the first start point. We can say this button is multifunction.

This button also can be a simple and single pad (actually only on the first beat that automatically detect by CDJ's). We can press and release that button synchronize with the other song that played to give double kick effect or even give a kick effect when the other CDJ reach a drop part on the song while played. 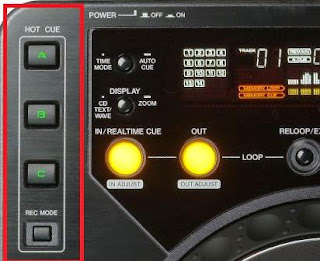 Its on Upper Left corner of the CDJ to make another cue points and play it when it pressed. If you want to use hot cue button, activate Rec Mode function and then play the song. Count to 4 (1,2,3,4) on the first beat press one of hot cue button (A, B or C), release the Rec Mode button.

You can make at least 3 point of hot cue that will trigger the starting point of your song you want to play.

How to activate the Hot Cue?

Take an example, if you just assign Hot Cue on A Button and it place on minute 2 and on the CDJ it almost come to the drop point of the song. Pull all of your channel Faders up and get ready when the drop point come, quickly pressed the Hot Cue on A button and pull down the other fader on the mixer, the one that we change the song.

The Hot Cue button also can be an extender to your creativity of mixing, you can always start the song on those three buttons and play the song over and over you can even combine the buttons with another Hot Cue buttons on the other CDJ so you can jump from one pint to another just in one press. How interesting is it?