The Top 3 Trap Sample Packs On The Web

The best trap sample packs include ea lot of bass, memorable drums, and an affordable price. The market is slowly getting flooded with new sample packs on a regular basis. It's becoming harder to find the best sounds, but on the plus side the variety is constantly improving. Here are the top three trap sample packs on the web today.

TRAP! is actually a complete series of trap sample packs released by SoundFreqs. It's one of the hottest series on the market and it's currently on volume number 3. You can tell TRAP! was prepared and orchestrated by people who have a real love for the music and sounds.

The people at SoundFreqs really wanted to push the idea across that sounds shouldn't be limited to one genre or another. They intend to fuse genres together and they've done a great job of this with the TRAP! Series.

Volume 3 is without a doubt the best sample pack they've released so for and the reason they're on this list of top 3 trap sample packs. Their sounds are loaded with unbelievable subs, bass, and plucks. The only thing that could make the track better is lasers and they decided to add those as well. So it's basically perfect. 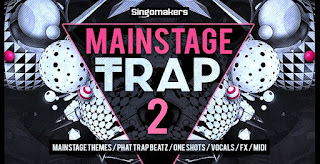 Mainstage Trap is a new series of trap music released by Singomakers. Mainstage Trap 1 was an incredible sample pack, but it definitely had its weak spot. Volume 2 managed to eliminate the weak spot and features only the hardest trap beats you can possibly imagine.

The sound quality itself is incredible and the sounds are varied. There are about 20 bass loops, 20 snare samples, 20 clap samples, and more than 100 drum loops.

This particular trap sample pack made is number 1 on the list of top 3 trap sample packs for two important reasons. First, it's a mix of some of the best trap sounds on the internet. Second, all of the tunes are completely royalty free. There's no messy paperwork coming to bug you in the future.

The sample pack itself cost less than some of the other big name samples out there, but don't let that fool you. The Essentials pack is more than just a sample with one good track. It's a personal selection of the best tracks from five separate Loopmaster Trap sample packs already released. There's no guesswork. You know every track sounds great. Click here for free plugin for trap.
Tweet