5 tips to make the song original mix, in Fl studio for beginners

Perhaps there are still my friends who do not understand, so I shorten it with cover 5 tips to make original songs mixed in fl studio for beginners. Especially for a DJ to have his own original songs, this will facilitate a career to become a famous DJ and professional. Hopefully can understand.

1. Understand correctly, the genre of the songs that we will create.
2. Determine the basic tone of the song
3. Start from the most easily done.
4. Don't  wanted to quickly finish the song
5. Create a simple song, as a first step

OK, let's discuss one by one 5 tips to make the original song mix to make it more clear. But this is what is on my mind all this time in making a song, just share it.

1. Understand correctly, the genre of the songs that we will create.

This section to avoid obscure songs, to stream any music. For example: If we want to make a song genre of electro, house, hip hop, then inevitably before making we have to understand the structure of the song. What kind of musical character, bass line, rhythm, tempo / bpm, sound instruments, and other musical elements.

2. Determine the basic tone of the song

Playing from the tone of what should be? Because it is quite important that the song into a beautiful and harmonious, and directional flow tone. According to the experience and I have learned in the genre of song original mix, the determination of the basic tone taking mostly mid tone of scales (C, D, E, F, G, A, B, C - and rising tone / octave). Major or minor scales. See the table below major scales: 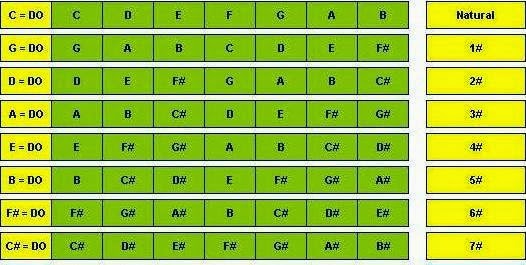 Here example original mix song that i made. Of the basic tone E.


3. Starting from the easy part is done.

For example: Start with making the beat, it's the easiest part, right?
If the beat is completed in created, including sound settings and other processes, then we go into the making of a bassline. The point is to do the most we mastered first. Do not make a melody first if we have not mastered the technique of making the correct melody. Because later will make us stuck in place and finally bored themselves.

Well sometimes be a disease of the music producer beginners, impatient want to quickly finish the song that can be shared immediately. Because the rush is mostly in finishing, mixing and mastering the song was not optimal. Even if we hear for yourself the results will be felt bland and raw audible sound, or sometimes there is an essential trace element that song is still lacking. It sometimes happens to me. :)

What I mean is simple to chord / key and element of music. Eg: For the beginning make an original song mix, as the song chord exercise enough 1- 2 only. Examples of tone E, further developed by the chord progression tone E. Especially for dance music  (for DJ), if a lot of chord it would make the song be up and down. Especially the part that should be beat, but it is different if the floating section (off beat). So try on the songs contained a beat that is not up and down.

Except existing remix vocals and must follow the chord original song that harmony. Many DJ who made the song, original mix chord on hold so as not up and down.

And if you make a simple mix original songs with just a little instrument and chords are able, we continued to make the song more challenging with 2-4 chord.
.
here's 5 tips to make the original mix with fl studio for beginners. I just shared insights and experiences only, and does not intend to teach. Because out there a lot of professional musicians. i hope this helps.

3 Remix
Music and Remix Updated at: 9:41 AM
Labels: Remix tips, Songs for DJ