How to convert audio file to vdjsample extension

What is the meaning .vdjsample file extension?
This file is a file format for the loop that only can be run exclusively by VirtualDJ software. And if we play the sound will be repeated, until we stop. Vdjsample loop file extension in the folder sampler, and the location of the file exists in My Document. How to save / convert audio file to loop vdjsample format?

1. Prepare the data source will be converted to file vdjsample, waves file format, mp3, ogg, and others who support VirtualDJ.

2. Move or copy and paste files that will convert / change to vdjsample extension, into the folder C: \ Users \ username \ Documents \ VirtualDJ \ Sampler \ recording, or other folders in the folder sampler.

3. Open the software virtuadj 8, then click the folder sampler on the left, select another folder where you copy and paste the audio file that will convert. Then right-click the file and select Sampler editor.

4. In the sampler editor tool you click the button loops, and click the save button (diskette image). On the tempo / Bpm please change value if you want to change. See the picture below: 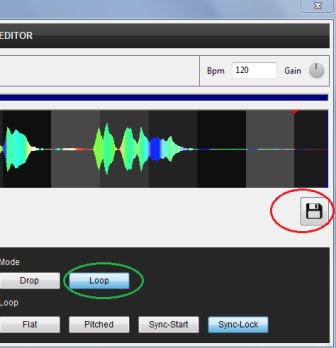 Once you click save, then the audio file will be changed to loop vdjsample extension, and the results you can use mashup song in VirtualDJ. Examples of such files is: are you ready.vdjsample. More details, please open from Windows Explorer, look in the folder sampler. All audio files that you save / convert to the format vdjsample will look, and the results of these will be saved in the same folder with the original audio data.

How to save / convert audio file to vdjsample extension could use VirtualDJ 8 home or pro version, but unfortunately we have to save each file one by one. Can not convert it all a lot, I've tried, and hopefully there is created a special software to convert audio files vdjsample format.
Tweet

3 Remix
Music and Remix Updated at: 7:55 AM
Labels: Virtualdj 8 tutorial